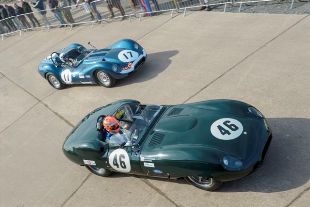 Inaugurated in 2011, this year’s Donington Historic Festival attracted as many, if not more than the 12,000 spectators who attended last year’s debut festival. Floods of enthusiasts packed the stands to savour historic racing in all its glory in spite of the typically British weather which plagued the weekend’s proceedings. This year’s festival was bursting at the seams with 12 races made up of a staggering 300 cars – and this only covered the action taking place on the track. A wide selection of marques such as Porsche, Jaguar and Lotus contributed to the hundreds of classic cars on static display of which graced the track’s infield.

JD Classics took part in five of the weekend’s races, the first of these being the Woodcote Trophy. Specifically for pre 1956 Sportscars, Wil Arif and Jarrah Venables lined up on the grid in our ex-Roy Salvadori 1950 Jaguar XK120 open two-seater. Competition was fierce amongst the thirty car strong field with Gary Pearson finishing the race in both first and second place having raced his Jaguar D-Type to second place with brother John Pearson and with Carlos Monteverde, also in a D-Type, to the win. Arif and Venables drove a strong race to bring the XK120 over the line in 15th position. 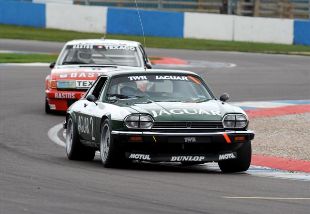 Created in honour of its 50th birthday in 2011, the E-Type Challenge proved to be so popular that it is to continue into 2012, the first round of which took place at Donington. In this two race opener the JD Classics entry was driven by Alex Buncombe. As the unpredictable weather conditions extended into the early evening, the field lined up on the grid behind Martin Melling and Jason Minshaw and the JD E-Type of Alex Buncombe in second position. As the roar of the charging E-Types raced down to Redgate corner, the next 30 minutes was a frenzy of excitement as the pack stormed into the race. The battle for the lead however very much remained a two car tussle between Alex Buncombe and Martin O’ Connell for the majority of the race until, on the penultimate lap the E-Type of O’Connell met an untimely exit in the gravel after a late lunge in an attempt to overtake Alex. This win also guaranteed Buncombe pole in the second of the E-Type Challenge races. 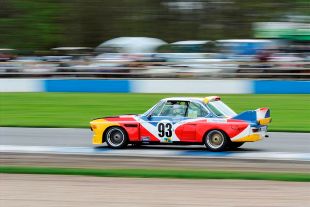 The JD Classics Challenge was Saturday’s penultimate race, with a field of 1966 to 1985 Touring Cars. Spectators filled the stands ahead of what looked set to be a highly charged and exciting race and, as predicted nobody was disappointed by what ensued over the following 30 minute period. JD Classics entered the 1984 ex-works TWR XJS driven by E-Type Challenge victor Alex Buncombe and Gary Pearson. Our 1974 BMW 3.0 CSL was driven by Andrew Smith and John Young. Having qualified in pole position, the XJS proved to be one to watch going into the race. The BMW also marked itself as a strong contender qualifying in 5th position. Win Percy, the XJS’ most famed driver was in attendance cheering on the car in which he drove to his first European Touring Car Championship in 1984. From the moment the fleet of growling cars pulled away from the grid and down into the first corner, the XJS of Alex Buncombe and Gary Pearson and the Ford RS1800 of Mark Wright and Dave Coyne were the two clear front runners, both vying for the lead. This fight carried on until the final lap when Buncombe overtook the Ford and looked set for his second win of the day much to the delight of the on-looking Win Percy. However, as Buncombe looked like the dead cert for victory, a spin just seconds from the chequered flag meant that the Ford stole back the lead and the XJS of Buncombe and Pearson had to settle for second position. Nevertheless it was a valiant effort with a rewarding outcome for JD Classics. Although having qualified well, our BMW 3.0 CSL did not finish.

As Sunday dawned, miraculously so the weather picked up and the day looked set to provide much better racing conditions then the previous day. The action was kicked off by the second of the two E-Type Challenge races. Having won the first, Alex Buncombe and the JD E-Type sat contently in pole position with Martin O’Connell sitting in second. However, as the race got underway, Buncombe maintained his advantage and when the race was stopped early due to an accident Alex still held the lead and was declared the winner. 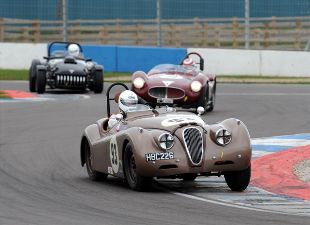 The first round of this year’s Stirling Moss Trophy series took place at the Donington Historic Festival and with the man himself in attendance the race adopted an even more competitive edge than usual. Demonstrating his world-famous 1952 C-Type – the first disc brake car to win a race at Reims in 1952, Sir Stirling was reunited with the famed C-Type and took to the track to demonstrate this great car (and man) in action.

The race itself saw our 1959 Ecurie Ecosse Lister Knobbly driven by John Young and our 1959 Costin Lister driven by the formidable Alex Buncombe and Chris Ward both perform consistently during qualifying, the Costin in particular qualifying 3rd. A field made up of a variety of marques including Lotus, Jaguar and Maserati, the Aston Martin DBR1 of Bobby Verdon-Roe won the race and took the acclaimed Stirling Moss Trophy title. The JD Classics Lister Knobbly performed faultlessly finishing respectably in 7th. Despite a strong performance in qualifying, our Costin Lister did not finish. 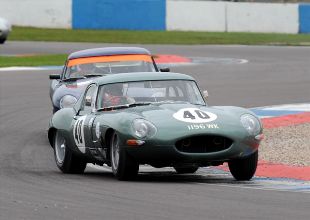 A stoic effort from the JD Classics team resulted in an impressive trio of trophies at this year’s Festival, the double win secured in the E-Type Challenge in particular emphasises the hard work and expertise of which JD Classics pride themselves. The success reaped at Donington is, we hope a reflection of the 2012 historic racing season.