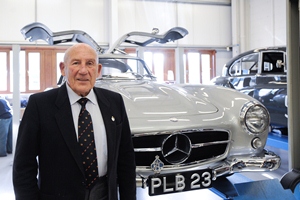 On Sunday 18th November, JD Classics opened their gates for the final breakfast morning of 2012 and what better way to round off the year than with another special guest speaker. We were privileged to welcome one of motorsports most recognised faces, the great Sir Stirling Moss. Due to an incredibly high demand, the morning was hosted as an invitation only event with over 400 guests in attendance. The superb weather conditions set the scene for what was to be a fantastic day as a sense of excitement descended on JD Classics in anticipation of our guest of honour. In the meantime, guests got to enjoy the sights that each of our six showrooms have to offer across our extensive campus. Visitors were also able to explore behind the scenes including our engine, competition and body shop all open for guests to look around and all staffed by JD personnel happy to answer questions. 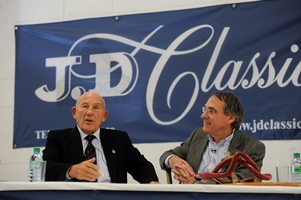 At 10.30 and with the crowd congregated in the main workshop, the highly anticipated Sir Stirling took to the stage and with the help of compare, motoring editor and journalist Simon Taylor, entertained a captivated audience as Stirling eloquently regaled the crowd with stories from the career of one of the most illustrious and influential figures in the history of motorsport. Bringing with him three of his period steering wheels, including that of his ill-fated Lotus, Stirling told of the near fatal accident at Goodwood in 1962 which not only ended his competitive career but left him in a coma for the best part of a month. Simon Taylor proceeded to show our fascinated audience the significant damage sustained by the steering wheel of the Lotus, having collided with Stirling’s head on impact. This and other such chronicles were shared with all the vigour and enthusiasm of a consummate petrol head with compare Simon Taylor leading the conversation and steering questions between audience members and the stage. 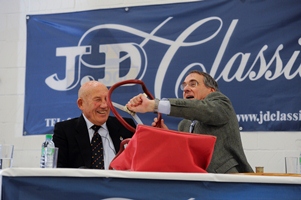 Throughout the morning, volunteers from Mission Motorsport collected donations, a charity of which Sir Stirling is a patron. The charity’s aim is ‘to aid in the recovery and rehabilitation of those affected by military operations by providing opportunities through Motorsport’ with some of the volunteers in attendance being ex-servicemen who have benefitted greatly from the group’s work. Thanks to the generosity of our guests, the morning raised not only money but awareness for this very worthwhile and relevant charity. Having thoroughly entertained our packed workshop for the best part of an hour and a half, Stirling spent a further hour signing autographs and photos for his enthusiastic fans.

Having feasted on a celebratory morning of all things ‘car’ that would have satisfied even the most astute of enthusiasts, the crowd dispersed from JD Classics as we close the gates to the public for another year. A fantastic way to draw this year’s series of open mornings to a close, we look forward to welcoming another vast array of guest speakers along to our headquarters next year. We also hope to see the dedicated motoring enthusiasts who have turned up on cold Sunday mornings to support JD Classics throughout the year – to you a big thank you and we hope to see you again in 2013!