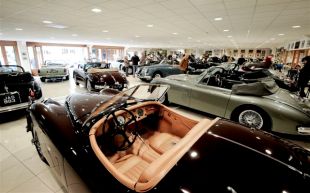 Our second breakfast morning of the year, JD Classics welcomed a crowd of over 700 car nuts who flocked to our Essex base. Having recently extended our complex with the addition of two new showrooms, we knew it would attract a lot of added attention. As the crowds began to swell we could tell this was set to be one of our busiest breakfast mornings to date. A regular part and one of the highlights of the morning is welcoming our special guest speakers, these being the famous 1988 Le Mans winning Jaguar team of Andy Wallace, Jan Lammers and Johnny Dumfries and the car in which they drove to this historic victory – the Jaguar XJR-9. 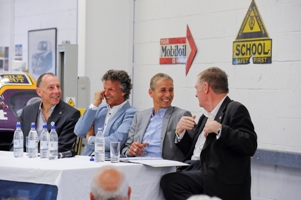 Being the first time the three men had been interviewed together for almost 25 years, our packed workshop eagerly awaited the hour long interview session with the trio. As our regular compare Alan Henry began to steer the questions feeding them anecdotes from their careers, it soon became apparent that the chemistry very much remained between the three former teammates as they kicked off the morning’s proceedings like old friends, sharing jokes and eventful stories.

The audience remained captivated as Andy, Jan and Johnny shared the story of their famous win at Le Mans in 1988, in particular how gearbox problems meant that Jan was forced to drive the final hour and a half of the race in fourth gear, a problem of which did not emerge until a later time, the team fearing it would provide an advantage for fellow competitors. In spite of this, the XJR-9 still took the Le Mans victory a clear two laps ahead of the second placed Porsche, a win of which ended Porsche’s impressive seven year reign at Le Mans. Having attracted such a large audience, the Le Mans win is just as abundantly relevant to motor enthusiasts today as it was nearly 25 years ago. 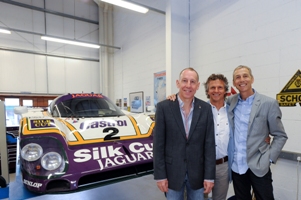 Having happily posed for pictures and signed autographs for a deluge of fans, the trio retreated to our main office as the crowds began to disperse. On the success of the morning, JD Classics owner Derek Hood said: “It was very pleasing to see motoring enthusiasts turning up in such large numbers to see our two new showrooms and to listen to what Johnny, Andy and Jan had to say. I am already looking forward to welcoming classic car fans to our next breakfast in the Autumn”. A statement of which we couldn’t agree more!