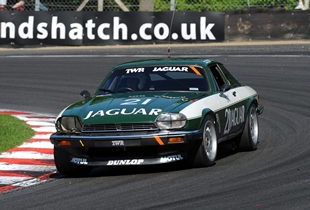 The Masters Historic Festival took place at Brands Hatch on the weekend of the 26th and 27th May and with the weather being particularly hot and sunny the crowds filled the circuit in their droves. Taking place on the full Grand Prix track, the Masters Historic Racing series encapsulates Formula One cars built between 1966 and 1977 and brings them to life over one seriously nostalgic weekend of historic motor racing at one of the country’s most recognised circuits. It seems that since the announcement of Jaguar Heritage Racing back in March, historic racing has never seemed so relevant, the brimming grandstands and packed spectator areas reiterating this growing popularity and demand.

Three of JD Classics cars took part in the weekend’s on track action participating in both the Brands Hatch round of the Woodcote Trophy and the Masters 70s celebration with JD Classics Challenge, a combined race made up of two series. The featured touring cars ranged from the late 1960s to the mid-1980s. Our 1975 Broadspeed Capri and the 1976 Jaguar TWR XJS were the JD Classics line-up for what was set to be a high octane race which lay ahead. Qualifying went well for both cars and out of the 25 car strong group our XJS qualified 8th and the Capri in particular went on to qualify an impressive 4th.

Lining up on the grid behind the pole sitting Ford RS1800 of Mark Wright and Dave Coyne was an extensive field of large engined touring cars looking set to create quite a commotion. Chris Ward was the first of the XJS pairing to get behind the wheel and by the time he came in for driver changes he had gained an impressive five places with the XJS now happily sitting in third as Gary Pearson stepped into the driver’s seat for the second half of the race. 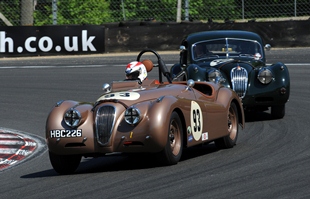 In spite of a superb performance in qualifying the Capri suffered a rear hub problem meaning it was unable to race. A new addition to our vast collection at JD Classics, the Capri is now back to its racing best and returned to the circuit on the 23rd June at Silverstone taking part in the JD Classics Challenge series. The race was very much dominated by the Capri which not only qualified on pole but drove a consistent race and took the victory at Silverstone.

Due to a slight pit lane infringement our Tom Walkinshaw Racing XJS was given a drive- through penalty. Whilst still in third position and having already done their driver changeover, both the first and second placed cars darted into the pits to do so. In spite of the incurred penalty the XJS emerged from the pits and was now in the lead by a couple of seconds. By the time the chequered flag fell, Gary Pearson and the XJS had extended the gap to a staggering 40 seconds and came across the finish line to a clear win. 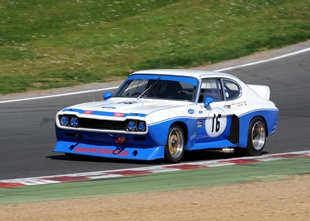 The third and final JD Classics entry in this year’s Masters Historic Festival was our 1950 ex-Roy Salvadori Jaguar XK120 which took part in the Woodcote Trophy. A grid made up of 28 genuine sports racers of the post-war era our entry was the only XK120 to take part. Driven by Wil Arif and Chris Ward our XK120 was up against a sizeable field of some much larger engine cars in its class including two Jaguar C-Types. Qualifying went well and despite being out horse-powered by other class competitors, Chris and Wil managed to bring the car home 7th in class. The Jaguar D-Type of Carlos Monteverde and Gary Pearson took the victory in this round of the Woodcote Trophy followed by another D-Type of Nick Adams and Robin Ward. The Lotus MK X of Malcolm Paul and Rick Bourne completed the podium finishers.

Another win to add to JD Classics ever expanding trophy cabinet topped off an uncharacteristically hot and sunny Masters Festival at Brands Hatch.