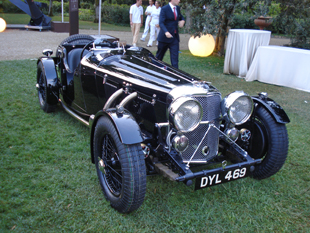 Set within the picturesque gardens of the Four Seasons hotel in Florence, the Uniques Special Ones is only a relative newcomer in comparison to other Concours, 2011 being only its second year in existence. Yet in this small amount of time, the Uniques have established themselves as one of the most elegant Concours in the World and although it is not as big as the Concours d’Elegance at Pebble Beach it still has the pulling power to attract the World’s finest and rarest classic cars ever produced. As implied by the name, the Uniques is dedicated to showcasing not only cars but objects such as art that are historically interesting or exceptionally rare. This unique concept that the weekend is based around is what has shot this Concours newcomer into the limelight within such a short space of time. The centrepiece of the Uniques is of course the International Car Concours which consists of cars that conform to a very specific set of eligibility rules, these include One-off cars, Rare Models (from extremely limited production), Prototypes, Concept and Show cars, famous cars (meaning cars that have been owned by celebrities, won important championships or are part of historic events), and very Limited Edition Cars (of which less than 20 have been produced).

Organised by MAC, the company who organise the World famous Mille Miglia, the concept of the Uniques is exclusivity, whether it be automotive or cultural, a theme emphasised by the romantic and intimate backdrop of Florence. Surrounded by the flowing champagne and VIP enclosures the Uniques is an incredibly elegant affair. Similarly to other Concours, the judging panel featured many a high profile name from the art and design World as well as the automotive industry including Lorenzo Ramaciotti, who has managed some huge international automotive brands such as Pininfarina and most recently Fiat. Other judges included Rolls Royce chief designer Ian Cameron and Fiorenzo Fantuzzi of the famous Modenese coach building family. To say that the judging panel know their stuff is an understatement to say the least.

Four cars were invited to take part on behalf of JD Classics and so we chose the finest of our wide variety of classic cars. Our four car line-up consisted of the 1954 Porsche 550, the 1952 Allard J2X, the beautifully restored 1954 Mercedes 300SL Gullwing and the 1937 2.5 litre Jaguar SS100. Due to the large volume of race meetings that have been on the JD calendar recently meant that the Gullwing was flown directly to Florence from the Concours d’Elegance at Pebble Beach after its appearance at the prestigious event the week before. The Porsche 550 was also looking at a busy schedule and as soon as the Uniques Special ones was over the 550 was to be shipped straight to Sicily for its appearance in the Targa Florio (for which a report is set to follow soon).

Although all four of our cars were commended at the Uniques, it was the Gullwing and in particular the SS100 that dazzled with the Gullwing bringing home a second in class award in the Gran Turismo coupe class and the Jaguar SS100 most impressively claimed top overall honours in the Pre-War Open Cars class as well as winning Best of class for Styling and Originality and Restoration within the same class. JD Classics had carried out a complete restoration to its original Bob Truett competition spec, so the car was displayed with its unique cycle wings and external exhaust pipes. Complete with its original restored lightened chassis the car looked truly magnificent in its original black paintwork. The SS100 spent much of 1938, just a year after its production racing competitively, winning silver awards in both the Exeter and Lands End trials. During its early racing career the SS100 also competed at Crystal Palace, Donington and Brooklands. However, soon after the car’s race career came to an abrupt halt in 1939 when its owner Bob Truett enlisted in the Army. It stayed under his ownership until he sold it in 1946 to Alvin (Spike) Rhiandro, a track and midget car racer who used the SS100 not to race but to tow his 500cc race car around the country to race meetings.

Not only was this a great shame but it was a far cry from its current situation for who’d have thought that 70 years on the SS100 was to be picked for such a prestigious award at the Uniques above some of the World’s rarest classic cars. In 1948, the car was eventually sold to its third owner Peter Richley who amazingly never took the car out on the open road in the 20 years he owned it therefore the car stood unused and gathering dust for many years. It wasn’t until 1986 and almost another 20 years later that the SS100 was brought back to life under the watchful eye of SS specialist restorer David Barber who lovingly looked after the car until it was passed on to its fifth owner Michael Roberts in 1976 who, after 30 years of ownership sold it to its current owner in 2007. In 1986, during Michael Roberts’ ownership the SS100 took part at the 50th anniversary of the SS100 International Weekend where the car was awarded the highly acclaimed Best Maintained Car award.

Although JD Classics had a successful appearance at the Uniques it was by far Ferrari that dominated the weekend’s events and saw the Italian giants take home four honours: Kenneth Roath’s 1955 250 Europa GT Coupe which took the Gran Turismo Coupe class, the Bernard Carl’s 1962 Fantuzzi-bodied Ferrari 268 SP which dominated the Sports and Racing Car class, the Peter McCoy’s 1951 212 Export Coupe which won the post-war Italian Style class and lastly but most importantly the David Sydorick 1956 Zagotta-250 GT Berlinetta which not only took the honours in the Gentlemen Driver’s Choice class but went on to be named Best in Show beating a large field of fiercely competitive contemporaries. For one marque to take four of the ten honours including that of Best in Show proves that, whether it be classic or modern cars, Ferrari are still one of the most dominant car manufacturers in the World.

Being only in its second year you would be excused for thinking that the Unique is nothing more than the slightly inferior doppelganger to the Concours d’Elegance held at Pebble Beach which over its 60 years has established itself as one of the if not the greatest concours in the World. Quite the opposite indeed as the Uniques offer some of the World’s rarest automotive beauties situated in one of the most stunning cities in the World. It is fair to say that because the Uniques special ones plays host to some of the World’s most treasured cars it is well on its way to rival the World’s top car events such as the Concours d’Elegance at Pebble Beach. The weekend proved to be yet another feather in JD Classics’ already flourished cap and another amazing team effort which demonstrates why JD Classics is such an internationally acclaimed company with yet another show-stopping result in the concours field.