Taking place on the usually sunny August bank holiday weekend, the 2011 Oulton Park Gold Cup meeting was plagued by uncharacteristically bad weather considering the time of the year, battling with windy conditions and near to constant rain. Organised by the HSCC there was a sprawling variety of racing classes to tickle of wide range of taste buds including Formula 500 and Formula Ford, a race class that has seen some of the World’s finest drivers pass through the ranks such as Jim Clark and Stirling Moss to name a few. With such a large variety of cars both from the past and present racing scene, the Gold Cup meeting is a definite addition to any dedicated car enthusiast’s calendar and the team at JD Classics were indeed no exception to the rule! 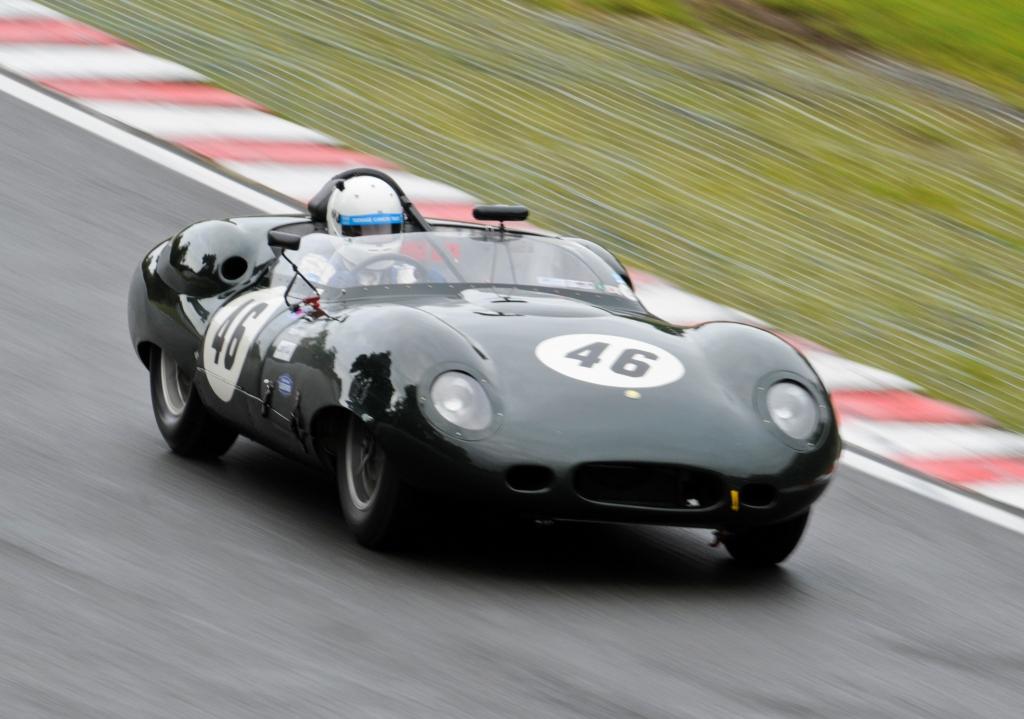 Being kindly invited to take part, JD Classics attended this motoring feast with three fantastic JD examples participating in three of the weekend’s events, the first of which being our Costin Lister. This Lister was driven by racing duo John Young and Andrew Smith in the Stirling Moss Trophy race, a race of which was plagued by the bad weather that hung over the Cheshire landscape like a veil with the Lister battling through the showery weather to qualify fifth on the grid and third in its class. The race itself, with the intermittent showers proved to be a real challenge even for the powerful form of the Lister. The usually dominant Verdon-Roe and his Aston Martin DBR1’s absence was duly noted as after having qualified on pole had suffered a misfire before having even left the grid. 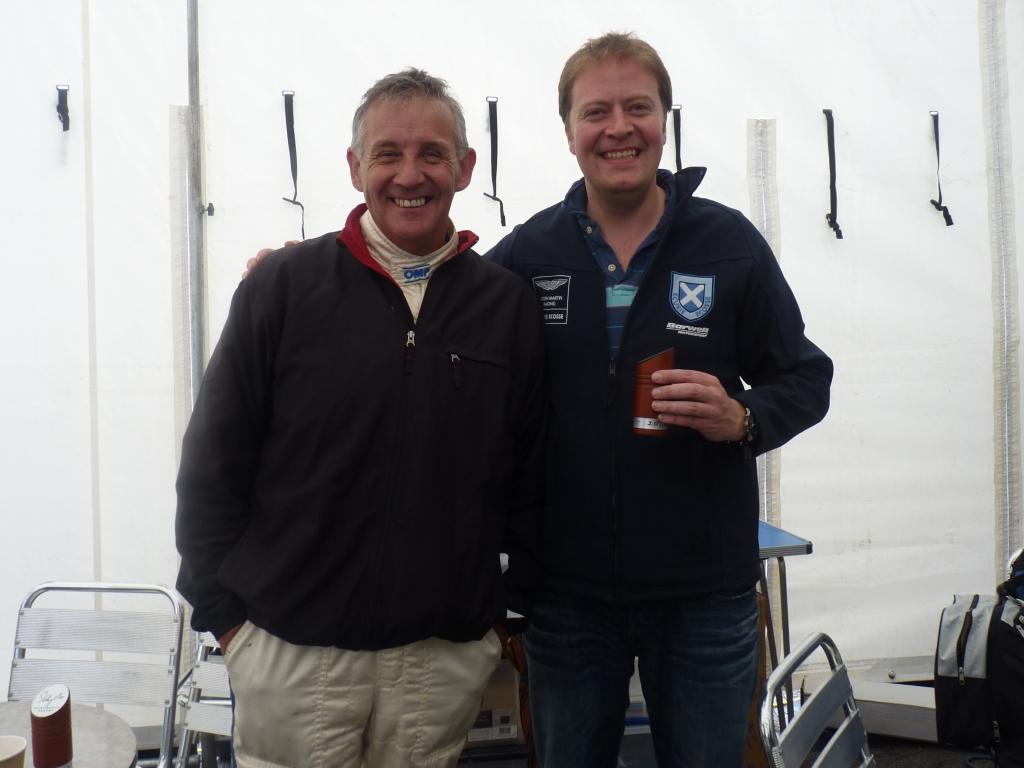 This meant that the race was missing one of the series’ most dominant front runners from the pack. From a spectator perspective this was indeed a great shame, however in spite of this the race proved to be far from dull. Whilst a battle for podium position ensued between the front runners of the Lister Knobbly of John Minshaw and Andrew Stretton, the Lotus 15 of Ewan McIntyre and the Maserati T61 Birdcage of Jason Minshaw, the JD Lister was enveloped in a battle for fifth place as Andrew Smith clung to the back of the Knobbly of Tony Wood and Alisdair McCaig in a fight for position which on the very last lap was stolen from the Knobbly as the JD Lister flew past into fifth place. Overall a pleasing result for JD Classics which not only saw the Lister finish respectably in fifth place but also finish second in its class in one of the most challenging rounds of the Stirling Moss Trophy meeting so far this year.

Drivers Will Arif and Jarrah Venables paired up in the Jaguar C-Type to take part in the Oulton Park Gold Cup round of the Woodcote Trophy series. Having qualified second in its class, the C-Type was set up in a good position for the start of the race, a race that was mostly dominated by pairing John Ure and Patrick Blakeney-Edwards in their Cooper T24/25. Whilst others struggled with the changeable weather and lost valuable seconds at changeover points, the Cooper was in and out of the pit lane with a new commander in tow in the blink of an eye.

The Allard of Denis Welch and Malcolm Verey really set the pace in the second half of the race with many falling by the wayside as the Allard charged past its competitors like a raging bull to take second place. The fast-paced and frantic race saw the C-Type storm its way to fourth place overall and second in its class. The last of the JD line-up for The Gold Cup meeting was the Jaguar E-Type which was raced by Andrew Smith in the E-Type challenge series in celebration of the beloved E-Type’s 50 year anniversary.

Famously described as “the most beautiful car in the World” by the legendary Enzo Ferari, the E-Type has enjoyed a year of celebrations and has demonstrated its famed good looks at many of the year’s most famous race meetings such as The Goodwood Revival and the Silverstone Classic. Having qualified an impressive fourth amongst a highly competitive and extensive field, the JD E-type lined up for the first of this two-part finale that was to conclude the last point scoring round of the E-Type challenge series. Jon Minshaw led the gaggle of E-Types on their maiden lap, however this was to be short lived as by the end of the first lap Minshaw had got into trouble after a short but fierce battle with Martin Stretton for position, resulting in a gravelly grave for Jon Minshaw and his E-Type.

As the unpredictable weather reverted to rain, there was a real game of cat and mouse developing between the now first placed E-Type of Martin Stretton and Graeme Dodd who utilised the varied weather conditions to his advantage as he stole the lead. Whilst this two car battle continued at the front of the pack, there was an exciting challenge ensuing further down the field as Jason Minshaw proceeded to power through his eager contemporaries moving up from fifteenth to third place and was eyeing up the E-Type of Graeme Dodd for second place. These front three continued to grapple amongst themselves for position harmoniously weaving in and out of each other in a synchronised manner. Finally Jason Minshaw, Martin Stretton and Graeme Dodd came over the line to take the podium positions. The unpredictable weather conditions of the weekend provided some difficult driving conditions, however the JD E-type remained unfazed throughout and came over the finish line in a solid sixth position.

Monday morning brought the second race of the weekend’s E-Type challenge and with that came another day of wet and windy weather. This, however was still not enough to dampen spirits as it proved to be just as action-packed and adrenalin-fuelled as the previous. Jason Minshaw had another good race as he led his rival from the previous day, Martin Stretton along with the rest of the field. The real star of the race, however was Jon Minshaw who started the race from the very back of the grid yet managed to pass a staggering twenty cars on the first lap alone and by the end of the first lap Jon Minshaw was in sixth place already. Within another few laps he had gained two more places and was well within view of the front runners. Although the race remained an incredibly close battle between the top four for the duration of the race it was Martin O’Connell who secured the win at the second leg of Oulton Park’s E-Type challenge. Despite the constant showers and high winds that battered the weekend’s action, Andrew Smith followed suit and finished in sixth position, maintaining his consistently good performance from the previous day’s action.

All three JD Classics cars performed to a consistent level all weekend producing some strong results in what proved to be a particularly tough weekend condition-wise. Nevertheless it still proved to be a highly productive weekend for the JD team with consistent performances from all three participating cars with two class trophies for both the Lister and the C-Type. These continuously impressive race results produced by JD Classics can only serve to mirror the expert time and care put into our cars and why this makes them one of the best in the business. Don’t believe us? Don’t take our word for it, come and see for yourself!