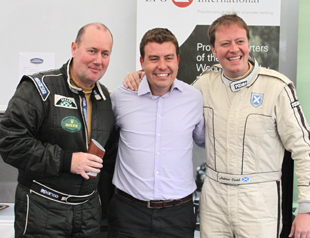 In addition to the vast number of classic race cars that were present, it was estimated an impressive 7000 classic cars were on show on the infield of the track, a 1000 of which were E-Types. This proved to be quite a turn out as many E-Type owners from all over the World showed their support and put on a united front to show their appreciation for the much-loved car on its birthday. This show of unity was epitomised when over 800 road ready E-Types took to the track together in a Guinness World Record attempt to achieve the largest parade of Jaguar E-Types at any one time.

The weekend’s racing was definitely not all about the professional drivers as an array of celebrities flocked to Silverstone to take part in the ‘all star’ race in aid of Cancer UK’s “Bobby Moore fund” . Celebrity drivers include chef Heston Blumenthal, light-footed Strictly Come Dancing star Brendan Cole and DJ Neil “Dr” Fox to name a few. Ex-England footballer Luther Blissett certainly got more than he expected when, in his Morgan Roadster clipped the curb on the first corner sending it into a series of somersaults across the track. Fortunately, he escaped unscathed from the accident which is more than can be said for the Morgan he was driving which was removed from the track looking a little worse for wear to say the least! In the end last year’s champion Rick Parfitt Jr, son of the legendary Status Quo rocker took the chequered flag for the second year in a row. So far it is estimated that the Celebrity challenge that took place at the Silverstone Classic has already raised over £11,000!

As regular as clockwork, the motley crew down at JD Classics couldn’t wait to get stuck into another weekend of high octane excitement. This year we took a total of 10 cars with us to the Classic, five national and five international runners. Logistically this proved to be a nightmare. Since the completion of Silverstone’s brand new pits (which is located between turns Club and Abbey) at the opposite end of the circuit from the old pits at Woodcote corner, we had five cars residing in either pits both miles away from the other. Needless to say for the JD boys that they came home a lot fitter than they were when they left with many a trip made between the two!

The focal race of the weekend had to be the E-Type challenge demonstrating the beautiful craftsmanship and agility that’s made this classic Jaguar one of the most popular sports cars ever made. In fact, the E-type has been voted Britain’s favourite car out of a select few hand-picked by a 15 man expert judging panel and fought off tough competition such as the Morgan Plus 8 and TVR Griffith.

In the first of our two E-Types, The British Racing Green car (981 YUD) was GT4 driver Alex Buncombe in race 1 and female ex-Formula One driver Desire Wilson in race 2. In the second E-Type (51196 WK) was driver Andrew Smith. For both Alex Buncombe and Andrew Smith their performance was exceptional leading them both to finish in second place in each of their races. For Desire Wilson who maintained consistently within the top 10 front runners for a lot of the race things took a turn when she was caught up as an innocent victim of an accident when Italian Manfredo Rossi spun through Becketts sweeping Wilson and her E-Type with it. Unfortunately, Wilson did not finish.

Alex Buncombe popped up again, this time with driving partner Will Arif in the Woodcote Trophy race in a 1952 Bronze Jaguar C-Type. However, Buncombe and Arif did not finish. It was quite a different story for Woodcote Trophy pairing John Smith and JD Classics very own MD Derek Hood who drove an inspired race in their 1954 Cooper T33 and sailed their way through to take second place overall which gave Derek his first podium position. Needless to say he was rather pleased... “It was my first personal podium since my schoolboy scrambling days some 35 years ago. Let’s hope I don’t have to wait another 35 years or the only race I will be entering is a wheelchair race!”

They were just pipped to the post by victors Gary Pearson and Carlos Monteverde in their 1955 D-Type. Not being able to stay out of the driver’s seat, the Stirling Moss Trophy saw Alex Buncombe and Desire Wilson pairing up in the 1958 Ecurie Ecosse Lister and together they finished in an impressive 7th place. JD Classics boss Derek Hood was obviously feeling the need for speed as he was back on the grid in another of his supercars within the blink of an eye ready to race, this time in a 1959 Lister Jaguar Costin with race partner John Young. They crossed the line in 18th position out of a large field of 46 cars. The Sir Stirling Moss Trophy winner was Scottish driver Ewan McIntyre in his 1959 Lotus 15.

In his fourth race of the weekend, Alex Buncombe was back behind the wheel with race partner Gary Pearson in the World Sportscar Masters series race. This time they put their hand to our Ford GT40. However, due to a first corner tangle the GT40 did not finish. In spite of this the racing partnership of Alex Buncombe and Gary Pearson proved to be a dynamic one in the race that was the highlight of the weekend for Team JD – The Group C race. Buncombe showed the rest of the field how it is done and qualified 2nd in the impressive Jaguar XJR9. He kept this momentum for the race too and produced a superb performance finishing 2nd in race 1 and 5th in race 2. Not one to be outdone by his team mate, Pearson demonstrated his accomplished driving ability in the sister car – the Jaguar XJR 11 in which he delivered a succession of consistent racing finishing 4th respectably in both races. Needless to say that the JD Classic team were thrilled at the performance of both drivers and cars.

For any die hard car enthusiast you really can get no better than the Silverstone Classic: a visual feast of cars that take spectators through a history of both national and international racing like an automotive timeline. This year in particular attracted a lot of attention due to the celebratory undertones that put the focus of the weekend predominantly on the E-Type Jaguar and its 50 years of exciting car enthusiasts the world throughout. From the pre 1961 sports cars (Lotus’ and Lister’s) of the Stirling Moss Trophy race to the Le Mans prototype cars (Jaguar’s and Aston Martin’s) of the Group C Sports racing, the Silverstone Classic was bound to have tickled the tastes buds of even the most hard to please of car fanatics! For us at JD Classics the weekend proved rewarding coming home with some exceptional race performances under our belts! We are already looking forward to the 2012 Silverstone Classic and cannot wait to show off what makes JD Classics reknown the world throughout – our beautiful cars.