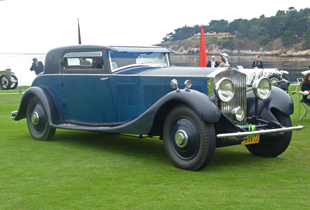 The first Concours d’Elegance was held in November 1950 and saw a mere 30 vehicles on display. The following year saw even fewer with only a small number of 23. Yet in the 60 odd years between its birth and where it is now it is staggering to see how in that time it has gone from a small meeting of cars to what is now described as the World’s most prestigious Concours.

Fast forward to recent years and it paints quite a different picture of what the Concours was like over 60 years ago, for example 2006 played host to an eye watering 175 classic cars from all over the World. Pebble Beach is a charity based event which raises large amounts of money for local charities every year and to date it is recorded that a staggering $14 million has been raised, $1 million of which at last year’s event alone. Translated meaning ‘a competition of elegance’, Pebble Beach is described as ‘exhibiting pre-war and post-war automobiles along with the latest in concept car designs’.

This year saw a wide spectrum of cars of all ages across the 200 entrants from the multi- million dollar Ferraris on display to the oldest existing car in the World – the 1894 Benz Victoria Vis a Vis. With these rare cars come the incurred costs of buying, restoring and maintaining these automotive treasures and that certainly does not come as a cheap hobby to maintain. It is often perceived that the Concours d’Elegance is a past time only accessible to the extremely wealthy; this is not the case as many collectors spend a lifetime putting all of their money and passion into restoring their classic cars to the highest of standards in a bid to be selected for Pebble Beach. However, at the most prestigious Concours in the World, competition for places is fierce. Once a car is accepted to compete it is not eligible for entry again for another ten years unless the car either changes ownership within that time or if the car has been restored since it last competed. If this is the case then the board of judges, made up of influential figures within the automotive World can invite cars back to compete at their discretion. 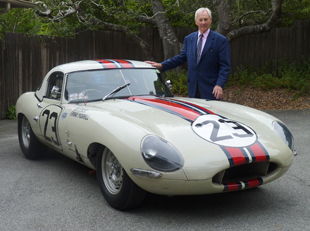 Although it is initially recognised as an automotive meeting it is also very much a social event in the same way as the Goodwood Revival which people attend as much for the elegant surroundings and charismatic atmosphere as they do for the on-track action. This is true of Pebble Beach where the extravagant surroundings of the flowing champagne and the VIP areas is very much an extension of the elegant glamour reflected by the cars on show. It is therefore no surprise that a celebrity or two is spotted amongst the crowds and this year was no exception with Richard Branson and American chat show host and classic car enthusiast Jay Leno enjoying the glorious sights of the Concours.

JD Classics were fortunate enough to be invited to take part at Pebble Beach and so with the proverbial ‘with age comes wisdom’ in mind JD took three of the older cars all fantastically steeped in history, the first of these being our custom built 1932 Rolls Royce Phantom II Windovers Continental. Upon its completion+ in 1932, the Phantom was immediately shipped to New York on the liner ‘Majestic’. Once there Sir Robin McAlpine drove the car across to Pebble Beach on business and once concluded he drove it back to New York, a journey which he recorded took 7 days. Sir Robin McAlpine also kept a log of the car's maiden voyage which still comes with the car today thus adding to its historical value. The Rolls Royce Phantom also took part in the 2011 Tour d’Elegance, a 60 mile coastal tour of the Monterey Peninsula and this year motor racing veteran Sir Stirling Moss and wife Lady Suzie Moss led the 150 strong pack away from the start line in a 1963 Mercedes Benz 300SLR. The Rolls Royce Phantom also took part and performed faultlessly which, for a completely original 1932 example that toured alongside some of its much younger rivals is an impressive achievement therefore we couldn’t help but feel a little pleased with ourselves.

JD Classics also took our customer’s lightweight E-Type and paid homage to the iconic sports car in celebration of its 50th birthday which was displayed on the beach as part of the launch of Jaguar’s new hybrid electric car, the Jaguar C-X75. The juxtaposition of the E-Type’s classic good looks and the futuristic design and technology of the environmentally friendly hybrid emphasises the extensive spectrum of cars produced by Jaguar over the last 50 years that separate them and how the C-X75 is now a low emission hybrid to meet the demands of an environmentally aware society, something which had never been a consideration at the time of the E-Type’s birth. Our E-Type also went on to be displayed at the Pacific Union Club at Nob Hill in San Francisco before being promptly flown back to England in time for the Goodwood Revival.

The last but by no means least of the JD Classics line-up was the very special restored 1954 Mercedes 300SL Gullwing, the car most famously known as the Stirling Moss and Dennis “Jenks” Jenkinson practice car at the 1955 Mille Miglia. This beautiful car has also appeared at the 1954 Paris Motorshow and was the 1955 Autocar Test Car amongst others. The combination of its steeped history and sporty gullwing design make it a crowd pleaser at any event and this was most definitely the case at Pebble Beach. The car’s most famous driver Stirling Moss was also present creating a special reunion between car and driver. Pebble Beach also had the pleasure of another motoring legend's company as driver John Surtees received special honours for his contribution to the racing world. Surtees is the only driver to win World Championships on both two and four wheels. His MV Augusta motorbike and the Ferrari 158 F1 which he drove to Championship glory in 1964 were also present.

With more than one special anniversary at the 2011 Concours d’Elegance, the E-Type shared the birthday cheer with German giants Mercedes Benz who were celebrating a mammoth 125 years in production. To mark this special occasion, the Sunday at Pebble Beach saw five different Mercedes classes sprawled across the 18th fairway showing off the very best of Mercedes-Benz throughout the years. There was also a special collection of nine pre-war Grand Prix Mercedes referred to simply as ‘white knights’. Many of these rare examples had travelled from other parts of the World just to take part in these displays. With these designs of the past were also glimpses into the future of Mercedes in the shape of their 2012 SLS AMG Roadster and the new Concept A-Class.

The best in show award is a highly coveted title that many a motor show enthusiast deem the peak of any classic cars career. Competing for the title this year were many iconic cars including a 1928 Mercedes Benz S Murphy Speedster and a 1929 Bentley Speed Six Gurney Nutting fixed head coupe. Of the nominees the Best in show title went to a 1934 Voisin C-25 Aerodyne. This was one of only 28 C-25s in existence therefore the rarity value adds to its desirability.

As usual, the 2011 Concours d’Elegance was a remarkable spectacle offering the best classic cars the World has to offer. Readily displayed across the 18th fairway the Concours shows off all there is to offer in the Classic Car World demonstrating some of the most beautiful and rare examples in existence. It is therefore no surprise why Pebble Beach is the premiere Concours in the World and why it is an annual trip for JD Classics and a must-see for any classic car enthusiast.