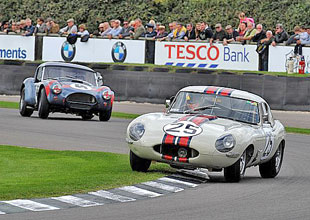 JD Classics is excited to be sponsoring a new historic race series called the Jaguar E-Type Challenge, launched to celebrate the 50th anniversary of the world’s favourite sixties’ icon. Jaguar Heritage and the Historic Sports Car Club (HSCC) have linked arms to create the new series, which at the moment will run for just one year only.

The series is comprised of two, 25-minute races, at each of four ‘must-see’ events on high summer’s 2011 historic race calendar. A fifth, special invitation-only race will run as the series finale. All five events will be fitting stages for this sumptuous and mesmerising masterpiece of modern sports touring car design.

Over ninety E-Types are said to have registered for the series since it was announced in 2010, with the first three past the finish line collecting the honours. Accompanied by several displays at each event, commemorating one of the most elegant and acclaimed sports cars of all time, enthusiasts of this legendary piece of engineering are in for a feast.

The world’s biggest classic motor racing festival, the Silverstone Classic is up next, from 22nd-24th July. Silverstone GP’s latest circuit configuration allows the organisers to field even bigger grids – and more action – than ever before. Spectators fortunate enough to attend will be able to say they saw race-prepared E-Types compete in their biggest grid of all time (for as many as 50 in all is expected to race). And the best forecasts suggest that this event could see the greatest gathering of Jaguar E-Types ever assembled, as their owners bring their pride and joys from around the world to the party.

The 2011 Oldtimer Grand Prix at Germany’s world-famous Nürburgring will host two series races next. Held from the 13th-14th August, this Oldtimer will be the 39th showing of one of Europe’s first and most important historic racing festivals. Often regarded as the most demanding, most dangerous track ever built, the Nürburgring will once more be set alight by over 600 spectacular competing automobiles – including a highly prized selection of Jaguar’s legendary super car.

Two more races close the series proper, featuring in the Gold Cup at Oulton Park (International). Attracting more than 400 vehicles each year since its launch as a non-championship Formula One race, the Oulton Park Gold Cup has developed into the north west of England's premier historic car event.

To cap it all, the Jaguar E-Type Challenge grand finale will be held at Goodwood Revival, on Saturday 13th August. For one year only, Saturday’s feature race at the Revival, the Fordwater Trophy, will be a 45-minute two-driver invitation-only race for some very special E-Types.

Corporate sponsor for this prestigious series is world-renowned classic car and vehicle restoration specialists JD Classics. Founder and Managing Director Derek Hood is delighted to be linked with these suitably large-scale celebrations.

“Having worked on some of history’s most important E-Types over many years, naturally we’re thrilled to help celebrate the car that caused such a sensation when it was launched,” he said. “The E-Type went on to set standards in design and performance that were to sit unsurpassed for a decade. In my opinion, it’s hard to overstate its influence and significance on the panoply of motor racing design. Which is why we’re very excited to play a part in supporting a series that will underline just why so many people over so many years feel the same way.”

E-Type enthusiasts – wherever they’re from – will no doubt agree and undoubtedly not want to miss the once-in-a-lifetime festivities this summer. If that’s you, you’d best get your skates on. Simply get in touch with the respective event organisers to secure your tickets. And if you’re an E-Type owner looking to compete in the four races, please contact the HSCC for more information on racing specifications and the like.

If you can make it, make it happen! This series looks set to be something especially memorable.