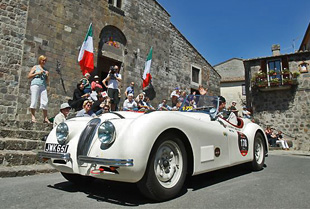 The Mille Miglia, translated, means thousand miles (or 1481 kilometres, to be precise). Accepted, these may well be Roman miles (about 128 metres shorter than an imperial mile). Even so, this is most definitely not a race for the faint hearted. It's a huge, demanding open-road endurance challenge, lurking behind a short, seductively unassuming name. And it comes steeped in history, together with an illustrious line of famous participants: Sir Stirling Moss and the late great Fangio to name just a few.

Although the contest was officially born in the late 1920s, its genesis can be traced as far back as 1899, when Brescia began its ascent as the cradle of Italian motor sport. The Mille Miglia that we've come to know and love today originated as a result of conflict in Italy back in the early 1920s. Having played host in 1921, Brescia watched helplessly as the Italian Grand Prix was summarily uprooted and moved to the all-new, purpose-built track at Monza in 1922. To the Brescians, the sleight felt palpable.

Naturally, this decision stirred ill-will among them, as they felt robbed of their prestigious motor sport jewel, one whose DNA had spent so several years at the heart of their culture. Because of this, the Brescia automobile club wanted to put their town back on the racing map, which they duly did – and then some. For what they created to take the place of the Italian Grand Prix on their calendar was to become one of the world’s greatest ever car races.

One of the distinguishing features of the Mille Miglia that makes it so different from any other motor sport challenge is that it’s an endurance-based event. This is due to one particular fateful accident when the original name of the game was speed. In the 1957 Mille Miglia, a 4.2 litre Ferrari lost control. But not only were drivers Alfonso de Potago and co-driver Edmund Nelson killed, so were nine spectators – of whom five were children. Subsequently, it wasn't until 25 years later at its revival that the objectives of the Mille Miglia were changed, focusing instead on endurance and time trials rather than speed.

Fast-forward again almost another 30 years and, never being ones to shy away from racing exploits, JD Classics just couldn't resist getting in on the action in 2011. We felt especially privileged to be racing at this year's Mille Miglia as places were more sought after than ever. Over 1400 cars looked to secure entry. And out of that huge groundswell of interest, a hugely privileged group of just 375 were successful in cementing a place on the starting line-up.

The rules of the Mille Miglia specify that participation is limited to makes and models of cars that competed in it between 1927 and 1957. Not everyone can meet that rule, but this way, the organiser's aim to echo the race's original look and feel before its untimely demise is met. And it allowed us at JD Classics to showcase some of our older classic cars and the immaculate condition to which we restore and maintain them.

Four great cars; one of the world's greatest road races

The first of these was the youngest of our four entries, the 1957 Jaguar MKVIIM which partnered drivers Terry O’Reilly and Pat McDowell, making its first appearance at the Mille Miglia. The second of our cars entry was the 1950 Jaguar JWK 651 XK120, driven by Derek Cooper alongside Olaf Meyer. Although this year was the first in recent years the XK120 had participated in the Mille Miglia, it has also competed twice in period.

Car number three for JD Classics was a three-times Mille Miglia competitor, the 1954 Porsche 550, driven by Kurt Englehorn and Florian Seidel. Last, but by no means least, the 1954 Cooper Jaguar T33 completed our entry. Having previously competed four times in recent years and once in period, the T33 was navigated around this historical course by Steve Riedling, the head of our historic racing department and JD Classics’ very own Managing Director and owner Derek Hood. Derek highlighted the enthusiasm shared by drivers and spectators alike for this glorious spectacle; “No matter how many times I experience it, I’m always taken aback by the fantastic support given by spectators. Their passion for these types of vehicle never ceases to amaze me”.

Although a very demanding course, it’s clear why the Mille Miglia has come to be regarded as one of the greatest races of all time, given the sweeping landscape of rural Italy and the seven impressive regions to cross on our epic three-day voyage. We could hardly wait to get out on the open road to take in its beauty. It’s this heady mix of challenge and spectacular scenery that illustrates the romance of the Mille Miglia, as it takes its competitors all the way from Brescia to Rome and back again.

However, with the magnificence of our surrounding landscape comes some treacherous conditions, including stretches of steep and winding mountain passes through the Alps. But being the sturdy, well-maintained classics that they are, such conditions were handled especially well by our cars and the experienced drivers behind the wheels.

One of the most historically significant features of the course is when it takes competitors through the town of Modena. This small rural town was the birthplace of the man who went on to epitomise sports car design and Italian culture, Enzo Ferrari. Ferrari, of course, introduced the world to a marque that would revolutionise the automotive industry. To this day, it remains irreplaceable among some of the world’s most luxurious and elegant car collections.

As ever, we were in great company at this year’s Mille Miglia. Not only were there a great number of car enthusiasts taking part, but we also noticed some familiar faces in the crowd. Two-time Formula One World champion Mika Häkkinen was competing with the nephew of legendary racing driver Fangio – in the same car that the Argentine great himself raced in the Mille Miglia back in 1955, the Mercedes-Benz 300 SLR. Car-loving British comedian Rowan Atkinson also took part in a 1933 BMW 328 Roadster.

As for the performance of our four entries, all cars performed faultlessly and needed no repairs during the race, besides routine maintenance at scheduled service points. All four cars also finished in respectable positions, with the Cooper Jaguar T33 doing exceptionally well, finishing 112th. Taking the chequered flag fist were Italian husband and wife team Giordano Mozzi and Stefania Biacca in their 1933 Aston Martin Le Mans.

We returned safely, feeling very pleased with our performance at 2011’s Mille Miglia. It was nothing short of a huge honour just to be involved in one of the racing world greatest treasures. It's widely believed that it’s virtually impossible to win the Mille Miglia if you're competing against an Italian. However, JD Classics believe that as long as the great Sir Stirling Moss can win it for us Brits, then we are more than happy to go back next year and give it another go!