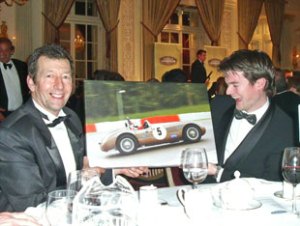 JD Classics capped off an exceptional competition year as the race crew behind The Royal Automobile Club Woodcote Trophy 2010 Class 4 winner. The award was presented before a glittering audience during January 2011’s Motor Racing Legends Award Dinner. The venue? The luxurious and elegant Mountbatten Room at the Royal Automobile Club’s famous Pall Mall clubhouse in London.

Since its launch in 2006, the Royal Automobile Club Woodcote Trophy looks more and more like one of the world’s most respected historic race series. With fierce competition simply to get a place on the grid, the races are for genuine sports-racers of the post-War era, up to and including December 1955. Typically, each race is an hour long and for two drivers and cars have to conform strictly to period specification.

The award-winning car in question is the 1953 Jaguar C-Type, once owned by four times World Motor Racing Champion Juan Manuel Fangio. Before 2010, the car had done all its period racing in South America. It wasn’t until 2007 that the car returned to England. It then had to wait another three years before its first-ever competitive race on ‘home soil’ at Silverstone – 57 years after it left Jaguar’s famed Browns Lane factory in Coventry.

Our C-Type’s drivers, Wil Arif and Alex Buncombe received the prestigious award, which was presented by none other than motor racing legend, Sir Stirling Moss. After an unbelievable return to racing for this historic C-Type in 2010, the Woodcote Trophy Class Award is a fitting finale to a season that brought several podium finishes.

JD Classics had supplied the car to our client, who had tasked us with preparing the car for races throughout the year, put pit lane teams together to appear trackside at challenges in France, Belgium, Portugal, as well as Britain, as well as handle all of the logistics.

To win such a special accolade, a team’s car has to perform consistently to get enough points at each of Motor Racing Legends’ Class 4 races to finish above its peers in the season’s final table. And thankfully, the C-Type had a commanding year, always finishing in each of the six races it competed in, without a single retirement, thanks to our team’s comprehensive experience.