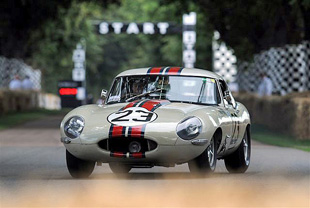 When JD Classics was asked to show four cars at Goodwood’s Festival of Speed (FoS) this year, we didn’t hesitate to say yes. Makes you think that an event that attracted over 180,000 people this year started off back in the 1930s as nothing more than a private hill climb in Goodwood House’s extensive grounds for the Lancia car club.

Yet, an initial idea from the Earl of March and the 9th Duke of Richmond (otherwise known as racing driver Freddie March) wasn’t to be realised until almost 60 years later in 1993, by his grandson, the current Earl. And it wasn’t long at all before the new event was regarded as one of the world’s largest automobile events.

And so the prestigious FoS legend was born.

When the festival first began back then, it attracted an impressive 25,000 spectators, despite a fixture clash with the 24 Hours Le Mans that year. Fast-forward 18 years and the event’s popularity has increased exponentially, fuelled by the special open atmosphere, where enthusiasts can watch the action just metres away from the track, and are allowed to mill about the paddock, up close and personal to cars and drivers alike.

People lucky enough to have got some of the highly sought after tickets for this year’s festival were witness to the type of automotive poetry in motion synonymous with Goodwood’s highly acclaimed reputation. Those attending were not disappointed. They enjoyed a variety of different races, including the challenging terrain of the Forest Rally stage, the high-octane action of the Sunday Times’ Supercar Run and, not forgetting the race that started it all those years ago and the festival’s biggest attraction, the famous hill climb. 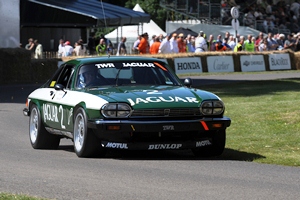 As much as we would have wanted to take all our historic race cars to Goodwood, we picked four that we felt would scintillate the most passionate of enthusiasts. Having had the pleasure of former drivers Win Percy and Chuck Nicholson recently at one of our Breakfasts at JDs, we felt it would be fitting to demonstrate the 1984 Jaguar TWR XJS at Goodwood, in which they were once partnered in period. And Win Percy himself wowed the crowds in this very special piece of automotive history, which was fitted with hand controls specifically for its Goodwood appearance.

Other drivers known to have driven this car in the past include ex Formula One McLaren drive Martin Brundell and TWR team manager Tom Walkinshaw, in which he raced alongside Win in 1986 at Mount Fuji. This particular car was also one of the last XJS’S to have raced at the Pukekohe raceway in New Zealand.

Not to be outdone by his former stable mate, Chuck Nicholson also made his solo appearance at Goodwood in the 1950 works XK120. This historic Jaguar is another rarity, being only one of six cars made ready for the 1950 competition season. And it was the only works Jaguar to compete in both the Mille Miglia and Le Mans.

It seemed only fitting that we should include an E-Type within our line-up. 2011 sees the Jaguar E-Type celebrating its 50th birthday, therefore making it very much the weekend's underlying focal point. In keeping with the birthday celebrations, we thought we would include a rare treasure, in the shape of the 1963 genuine Jaguar lightweight E-Type, being the third in only a 12 car fleet ever built, thus adding to its wow value.

Having previously raced in the 1963 Sebring 12 Hour and the 1963 Laguna Seca USRRC races, this special piece of E-Type history spent the best part of 35 years left standing with a mere 2,663 miles on the odometer. It wasn’t until 2010 when purchased by JD Classics that this beautifully made car was given a new lease of life. Subsequently, it ran in the TT race at last year's Goodwood revival, as driven by Alex Buncombe and Desiré Wilson. After so many years of inactivity, we felt it was only fair that such a tremendous find should be shown off to the world and represent JD Classics’ fondness for the E-Type at this year’s FoS.

Our fourth demonstration car this year was the 1987 Jaguar XJR9, driven at FoS by racing driver Andy Wallace. Having competed at some high profile tracks, the XJR9 finished in a respectable third at Daytona in 1988. It was shipped later that year to the UK in preparation for its debut at Le Mans, where it finished 16th before promptly returning to the USA. In years to come, the Jaguar XJR9 would compete again at Daytona and other circuits such as Portland, Sears Point, and Del Mar.

But it wasn’t until more recent years that this British treasure was returned to her homeland in which she paid another visit to Le Mans and raced at Donnington in 2008. The Jaguar XJR9 also demonstrated its incredible agility when she came first in the prestigious Silverstone Classic in 2009.

Although FoS is widely recognised as a celebration of all great racing automotives, we couldn’t help but feel that this year it was celebrating one car in particular: an oldie but a goodie – the Jaguar E-Type.