Competitive on one of the world's most challenging circuits 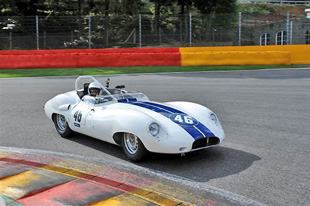 A large collection of classic cars flocked to the deeply demanding Spa Francorchamps circuit for the famous Six Hours of Spa racing event. Around 650 classic vehicles and over 1,000 drivers entertained a willing crowd in over 20 different races. An exciting high-octane weekend soon burst into life in the slipstream of the style and power symptomatic of the old classic sports cars participating such as Ferraris, Aston Martins and Jaguars of the 1950s.

The star attraction of the weekend was of course the eponymous six hour endurance race which saw a combination of touring and sports cars which had been produced before 1965 take to the circuit on a sunny Saturday evening. Spa, notorious for being one of Europe most rain-sodden circuits, miraculously offered some much finer conditions. With the sun beating down on Spa for a change, the JD Classics team took these good conditions as a sign that with this uncharacteristically glorious climate, good fortune would roll in with it!

All three JD cars gracing the especially fast Ardennes track were also in action at the Goodwood Revival the weekend before (the Costin and Cooper having raced at Goodwood, with the C-Type on static display) both performing impressively at the Revival. Therefore, the JDC team had only a couple of days to prepare the cars for Spa since returning from Goodwood.

However, this proved no problem for the JD Classics team, who prepared these three superb sports cars to race ready standards pretty smartish. So JD Classics' line-up for the penultimate Motor Racing Legends meeting of 2011 included our 1954 Cooper Jaguar T33, the 1952 Jaguar C-Type and our 1959 Ex-Briggs Cunningham Costin Lister – taking the track in two of the weekend’s races, the Woodcote Trophy and the Stirling Moss Trophy.

We had two cars competing for the Woodcote Trophy (featuring post-war racing cars up until 1955). Lining up on the grid poised to pounce as the lights changed from red to green was the Cooper Jaguar, captained by JD Classics’ owner Derek Hood and partnered by John Young, as well as the C-Type, driven by Will Arif and Jarrah Venables.

As the wheels spun in earnest from the rolling start, pole sitters Carlos Monteverde and Gary Pearson led the pack into battle in their white D-type with Monteverde behind the wheel for the first stint. The Irvine Laidlaw’s Ecurie Ecosse driven by Simon Hadfield however was hot on his tail pushing Monteverde and his D-Type to the limit in their fight for first position.

Sadly, it wasn’t to be Hadfield’s victory as he reluctantly retired having suffered a puncture. This allowed Gary Pearson in his own D-Type to move up into second place. Driving his car for the first stint only, Pearson handed the reigns to co-driver Andrew Smith before hopping straight into the D-Type he was co-driving with Carlos Monteverde – which he drove sublimely to take the chequered flag. And Pearson’s own D-Type was driven equally as well by Andrew Smith, who claimed second.

So, a doubly-rewarding weekend for Gary Pearson. But completing the podium line-up in third was our own Derek Hood and John Young in the Cooper Jaguar T33. Another superb drive saw Derek achieve his second podium this year, the first of which was at a Woodcote Trophy race meeting at the Silverstone Classic earlier this summer.

A mammoth six seconds ahead of the D-Type of Nick Adams and Fred Wakeman, the Cooper T33 also finished third in its over 3000cc Disc Brake class – an added bonus to an already impressive race performance. Will Arif and Jarrah Venables in the 1952 Jaguar C-Type also finished very respectably in sixth place overall, but had the additional satisfaction of winning their class.

For JD Classics, it seemed as though the good fortune was as abundant as Spa’s unusually fine weather.

The Stirling Moss Trophy race features ‘epic sports cars built before 1960’. Therefore what finer example of a classic race car is there than the 1959 Ex-Briggs Cunningham Costin Lister? And what better driving duo to have behind the wheel is there than the Woodcote Trophy’s top-two drivers, Gary Pearson and Andrew Smith?

Although we finished in a very commendable sixth place overall and second in class, it was to be the spectacular driving of Bobby Verdon-Roe in the Ferrari 246s Dino that stole the show and pipped the Lotus 15 of Roger Wills and Joe Twyman to the post during the final few laps of the race. Despite the unyielding speed of the Ferrari of Verdon-Roe, the Lotus clan dominated second, third, fourth – as well as fifth position for much of the race. The fifth-placed Lotus of Ewan McIntyre had begun the race from pole position. However, he lost valuable seconds due to a drive-through penalty, incurred for speeding in the pit lane.

The fact that Gary Pearson and Andrew Smith not only finished sixth in a large 32 car field as well as second in the over 2000cc Disc Brakes class was very encouraging. Even within such large fields of powerful sports cars and competitors, the JD Classics team consistently deliver strong performances, as emphasised again at the Spa Francorchamps leg of the Motor Racing Legends season.

So with another year’s Six Hours event successfully negotiated, it was on to the final meeting of the 2011 calendar, set to take place at the Algarve Historic Festival at Portimao in Portugal on 21st-23rd October. JD Classics line up for the Group 1 and 2 Touring car challenge. This will see three of our power player cars take to the track: the Jaguar TWR XJS, Datsun 2402 (‘Big Sam’) and the BMW 3.0 CSL.

Guaranteed to be another sell-out weekend, you’re sure to see the JD Classics team all present and correct with some of our finest classic racing cars making their appearance at this season’s curtain call. We’ve got a feeling it’s going to be some finale and an exciting conclusion to this year’s series…