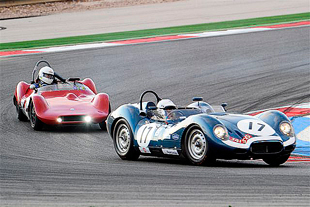 Located on the hills looking over sunny Portimao, the Autodromo de Algarve could quite easily rival some of the World’s greatest circuits even though it has only been in existence since 2008. Costing a staggering €195 million to build, the track also incorporates a karting track, technology park, sports complex, five star luxury hotel and apartments within its grounds. In fact, its presence has had such an impact on the racing World that in October of last year the circuit was added to the Formula One testing itinerary which is a coup for such a new track. Since its completion this year’s Algarve historic festival was only the third that had taken place yet in that small amount of time the Autodromo rivals some of the World’s most established circuits such as the Nurburgring and Spa Francorchamps in terms of its complexity and the challenging and unforgiving nature of the track.

This was now the second year which JD Classics had been invited to take part at the Algarve Historic Festival and so the team entered six of their world renown racing fleet to compete at this vast track, three of which were to race in the final round of the Stirling Moss Trophy series and the other three to take part in the first European round of the JD Challenge, a new series to the 2011 calendar.

Sponsored by JD Classics, the JD Challenge sees Group 1 and 2 along with Group A Touring cars which would have competed in the British and European Touring Car Championships during the 1972-1985 period. The JD Challenge line up consisted of three of JDC’s most powerful touring cars, the first of these being the famous Tom Walkinshaw Racing Group A XJS which was last raced at the Pukekohe circuit in New Zealand. The XJS lined up on the grid under the careful watch of the experienced racing duo Alex Buncombe and Gary Pearson. Also taking part was the BMW 3 litre CSL, a classic car which dominated the sport for much of its 1970s and 1980s heyday which was driven by John Young and Andrew Smith. The famous Win Percy Datsun, more commonly referred to as “Big Sam” was the third of the high octane trio that took part in the JD Challenge. The Datsun saw Alex Buncombe take to the driver’s seat again in his second car of the race, this time with Will Arif as his team mate. 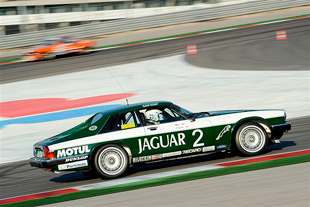 Qualifying saw all three cars perform well, the CSL qualifying 6th and “Big Sam” 4th with most notably the TWR XJS qualifying an impressive third of a field of 18 cars. This was in spite of the XJS sustaining front hub problems during qualifying which made some urgent repair work for the JD pit crew in order for the car to be race ready for the Saturday evening showdown. However, this was quickly dealt with and corrected to JD Classics’ usual high standard.

Come race day, the three cars lined up with the rest of the grid behind the pole-sitting Capri RS 3100 of Antonio Nogueira and the Jaguar Broadspeed of Chris Scragg anticipating what was to be an exciting race from start to finish. The Ford Capri of Nogueira maintained a clear lead over its rivals to begin with until suffering a puncture which temporarily took it out of the race. With the Capri limping to the pits this meant that both the TWR XJS and BMW CSL moved up into second and third place. In any race there are always casualties and this was no exception when the Broadspeed Jaguar of Chris and Anthony Scragg which at this point was now running in first place succumbed to gearbox problem thus catapulting the two JD cars up into first and second.

Although Gary Pearson was currently in the lead in the XJS, he was soon to be challenged by the previously fallen Capri which had managed to make it back to the pits for a new tyre and, like a red flag to a bull had charged its way back to podium position and with a second wind regained the lead back from the XJS. Further down the field “Big Sam” was also holding its own. Once driver changeovers began to take place, positions came under serious threat however this was not a problem that seemed to affect any of the JD Classics cars as changeovers occurred seamlessly, this largely being down to the efficiency and diligence of the pit crew. Unfortunately, things didn’t go quite as planned for “Big Sam” who was reluctant to restart once stopped and subsequently developed an electrical problem which ended the race for this historic car. Things were going quite the opposite for the XJS whose race appeared to be going from strength to strength. Alex Buncombe had taken over from Gary Pearson and had moved the car back into the lead and, after some excellent laps the BMW CSL moved up to second position again. Indeed, it seemed that despite the ever increasing pace of the previously punctured Capri it was no match for the JD cars which maintained position and raced past the chequered flag in first and second position. The Ford Cologne Capri of Vince Woodman and Dan Cox took the final position on the podium in third. Being one of the best JD Classics race results to date the team were hopeful for an equally successful performance in the Stirling Moss Trophy.

The Saturday of Portimao was a busy day for the JD team for as soon as the JD Challenge was over it was time to focus on the second race of the day – the final round of the Stirling Moss Trophy. Taking place in the early evening, this two-hour race was to continue into the darkness of the night making the challenging twists and turns of the Autodromo de Algarve harder to negotiate. JD Classics had three cars competing in the series finale, the first of the three being the 1958 Lister Knobbly driven by JD regulars Alex Buncombe and Gary Pearson. Second in the line up was the 1954 Cooper T33 of JD owner Derek Hood and Andrew Smith. Finally the 1952 Jaguar C-Type of Will Arif and John Young completed the JD Classics team for the race.

Qualifying took place on the Friday evening and went well particularly for the Lister which qualified on pole position with the Cooper qualifying just outside the top ten. Friday’s qualifying allowed the JD team time to sit down and discuss tactics, driver changes and to work out fuel loads. The team decided to run all three cars with enough fuel to last the race in a bid to gain some extra vital seconds. As there didn’t appear to be any major problems with the cars after qualifying, the team thought it best to leave the cars to settle for the evening before refuelling and checking the car in preparation for Saturday evening’s race.

Lining up on the grid ahead of the start of the Stirling Moss Trophy the JD Lister was cornered amongst the Lister’s and Lotus’ that made up the rest of the two front rows. Although the Lister got a good start, it was pipped to the lead by the Lotus 15 of Roger Wills and Joe Twyman. However, Alex Buncombe was not far behind. The early part of the race appeared to be going to schedule for all three cars and whilst the Lister fought for the lead, the Cooper T33 of Derek Hood and Andrew Smith was holding its own further down the field with the C-Type of John Young and Will Arif steadily moving up a couple of places through the rankings. Unfortunately, the team were about to encounter a patch of bad luck which was to befall the Cooper who suffered a puncture that threatened to put the car out of the race had it not been for the quick thinking of the highly experienced JD pit-team who saw the Cooper back on its way after a quick tyre change. It was not long after this that the JD team’s worst fear was about to be realised when the Lister acquired a drive-through penalty for speeding in the pit lane. However, with Alex Buncombe yet to take his penalty, it was then the C-Type that had to make an unscheduled stop suffering with an overheating problem which the pit crew quickly diagnosed as a broken water pump belt. Yet again no mechanical problem proved too big for the JD crew and the Jaguar was soon back out on the track. This now meant that the C-Type had some serious work to do to make up lost time.

By now the circuit was enveloped in darkness and like so many others, Alex Buncombe was experiencing difficulty reading the JD pit board. However, once he finally saw it he made his way into the pits to take his penalty. Meanwhile although having put in some good lap times the Cooper was struggling to regain the places lost after suffering the puncture.

As the race entered its final stages, Alex Buncombe was in third having produced some absolutely superb laps in the Lister and making up the time that was lost during his drive–through penalty. Over the last 15 minutes of the race, the pit-crew were noticing that the Lister was gradually closing the gap between himself, the second placed Lister and the front running Ferrari 246s Dino of Bobby Verdon-Roe and Gregor Fisken. Within another two laps Alex Buncombe was so close to the second placed Lister that as they came down the start/finish straight and crossed the line the team thought that next time round Buncombe would be second but to their surprise the JD Lister had suddenly jumped from third to first position. This was because not only had Alex Buncombe overtaken the Lister that was previously in front but unknowingly the Ferrari had broken a prop shaft further along the circuit thus putting it out of the race and moving the JD Lister up into the lead. When the flag fell after another three laps Buncombe had comfortably secured his victory having pulled away from the pack with a 22 second lead.

For the second year in a row, JD Classics have triumphed in the finale of the Stirling Moss Trophy having won the title last year at Portimao in the same Lister which was driven by Gary Pearson and John Young. This year’s race also had an added bonus for the JD team as the C-Type also finished third in its class. Although the Cooper turned in some impressive laps, they found it difficult to regain the time lost when the Cooper unfortunately suffered its puncture.

The 2011 Algarve Historic Festival proved to be a spectacular weekend of racing with JD Classics taking home an amazing six trophies in total including of course the wins in both the JD Challenge and prestigious Stirling Moss Trophy, races that provided JD Classics with their greatest race wins yet! Here’s hoping for more of the same at this fantastic track in 2012 and beyond!