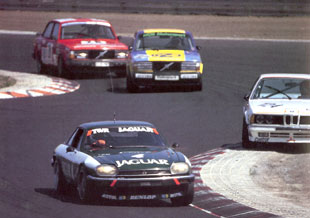 JD Classics is putting its name to a brand new race series as the main sponsor, starting at Donington's very first Historic Festival in early May 2011.

Motor Racing Legends will organise and run the JD Classics Challenge. This series will cater for cars that ran in the British and European Touring Car Championships. It’s open to owners of real race cars that conform to Group 1, 2 and A touring cars specification, having raced between 1977 and 1985.

Touring car fans will once more be able to see great British legends such as Jaguar's V12, XJ12C and XJS, Ford’s Sierra XR4i and of course the Capri. Rover’s V8 Vitesse and Triumph’s Dolomite Sprint are naturally also included, while elsewhere in Europe we can anticipate BMW’s 3.0 CSL and 528, as well as Alfa Romeo’s GTV6.

As if all that wasn’t enough, selected IMSA Production Cars from the American Series are invited, giving classic racing enthusiasts the rare chance to see these cars in competitive action outside the USA. Among the many exciting prospects this series holds, it could possibly throw up a Group 44 XJS or a Mazda RX-7 racing on English soil. And don’t forget the Japanese contingent, such as the Datsun 240Z and Toyota’s Celica.

This great new series promises touring car enthusiasts the chance to see these fabulous cars race once again and relive those heady days when Win Percy, Andy Rouse and the like thrilled us time and time again.

Just keep one eye on this website over the next few months for further information and pictures of interested cars as they become available.