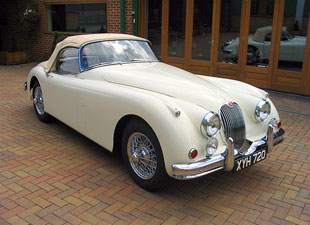 JD Classics has an enviable reputation for producing concours restorations that have been acclaimed worldwide. From national Champion of Champion competitions here in the UK to the prestigious Pebble Beach Concours D’Elegance in California, we’ve repeatedly demonstrated that our award-winning efforts can emerge from the closest scrutiny with the highest praise.

Not only do our clients rely on us for faithful, meticulous restorations, they also depend on us to help them present their cars on competition day itself. We have many years of experience preparing cars for concours competitions. So we work hard to ensure our wealth of insight on what these cars should look like and what judges will therefore be looking to see is put to good use.

More often than not, all this means we get to share a great story with our clients that’s worth telling.

John Brewster is one of our clients who has bought a number of cars from us over the years. Back in 2007, John had notable successes with his dreamy Jaguar XK150S 3.8 litre roadster, on which we had completed an eye-catching chassis-off concours restoration for him. In particular, John’s stunning cream and beige coloured roadster won the Meguiar’s Club Showcase Champion of Champions concours competition in the same year.

Meguiar’s Club Showcase pits 16 cars head-to-head. Each one will have won their marque’s respective club competitions across the UK national concours scene. Effectively, it’s the major marque clubs’ grand finale. The showcase is held at the ever-popular Classic Motor Show, which draws tens of thousands of car enthusiasts from all over Europe and even further afield to revel in historic cars.

Held annually at the NEC, UK’s biggest exhibition centre, the Classic Motor Show is also home to the Jaguar Drivers’ Club’s own Champion of Champions concours. Here, the winners of seven different Jaguar registers, having come out on top against other makes in their register earlier in the year, are pitted against one another in a showdown for the coveted Champion of Champions title.

This was the same competition we helped our client Robin Green win in 2009 with perhaps the world’s most decorated SS100. Could a JD Classics concours restoration possibly win it again two years in a row and how did we come to be in such a privileged position again so soon?

Back in June 2010, John’s car had won the XK Register’s XK Car of the Day, at the Jaguar Drivers’ Club’s XK and XJ International Day, held at the Shuttleworth Collection (in Bedfordshire, England; home to vintage and veteran vehicles – including bikes, cars and aeroplanes – from the 1900s to the 1950s).

Having won the title, John’s XK150S had the honour of being put forward to represent the XK Register at the Jaguar Drivers’ Club’s ultimate Jaguar concours competition of the year.

Seemingly not content with the heady glories of Autumn 2007 and more recent successes, John accepted the invitation!

And the winner is…

And so came the judging. The process towards reaching a verdict is just as involved as it is every year. A volunteer team of independent judges examine the cars on the Saturday. Beyond thorough, the adjudicators can take as long as two and a half hours to assess each vehicle across seven principal areas.

As ever, the atmosphere up to this point is extremely good-natured. Everyone showing their car on such a stage is simply delighted to own a vehicle that has been deemed worthy to sit in such esteemed company. But when the judging starts, well, the air really does begin to bristle with nervous tension.

Why? Does all this matter that much? For some, maybe not. But every man welcomes the recognition that whatever it is he’s invested his efforts into has value in others’ eyes. This is especially true if he’s invested a lot of affection into those efforts – and especially true if those eyes belong to folk whose opinion counts for something. And to receive that affirmation really does add something special to the joy of ownership.

So imagine if you will how John felt, come Sunday afternoon, as the crowds gathered around the Jaguar Drivers’ Club stand for the big announcement. Pleasantries and secondary acknowledgments were all dispensed as the milling crowd’s anticipation quietly grew to what felt like a high-pitched hum of excitement on mute.

All the competitors were standing to attention next to their pride and joys as casually as they could, with some trying hard not to look as if they cared too much, but each one probably forgetting to breathe.

Then it happened. The great winner was announced as… John Brewster’s 1960 Jaguar XK150S 3.8 litre roadster!

Everyone was buzzing. It was a tremendous privilege to share such an extraordinary accomplishment with him and John was clearly thrilled as he thanked “all at JD Classics for a wonderful team effort and a fantastic achievement!”

This win is testament to the world-class vein of form JD Classics has shown in its concours restorations over a number of years lately. And it gives us the challenge to scale similar peaks with all our clients’ current and future restorations.

But as you can probably guess, with rewards to be reaped that feel as special as this one, it’s a challenge we’re more than willing to take on..